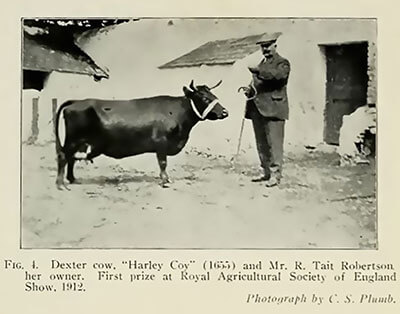 The native home of the Dexter is in the south and southwestern parts of Ireland where they were kept by small landholders and roamed about the mountainous districts in an almost wild state of nature. The origin of the Dexter is quite obscure. The common assumption has been that the Dexter breed was derived from the Kerry breed or that it was a cross between the Kerry and some other breed, perhaps the Devon. It has also been claimed that a “Mr. Dexter”, agent to Lord Hawarden, was responsible for developing this Irish breed by selection from the “best of the mountain cattle of the district”.

The English Kerry and Dexter Cattle Society was organized in 1892 in England. Before that date, breeders of Kerry and Dexter cattle were obliged to register their cattle in the books of the Royal Dublin Society of Ireland. Volume One of the English Herd Book was published in 1900 and Volume Two was published in 1902. By January 1912, eleven volumes of the English Herd Book had been published and the following number of animals registered: 238 Kerry bulls, 1,334 Kerry cows, 455 Dexter bulls, and 1,820 Dexter cows.

The introduction of Dexters to America probably occurred long ago, when there was no distinction made between Kerries and Dexters in importations. The first recorded knowledge of Dexters in America occurred when over two hundred Dexters and Kerries were imported to the United States between 1905 and 1915. A large percentage of these were imported to Elmendorf Farm (Elmendorf Herd) in Lexington, Kentucky, Howard Gould (Castlegould Herd) of Port Washington, New York, and Mrs. James J. Hill (North Oaks Herd) of Gladstone, Minnesota.

In 1910, Professor Charles S. Plumb of Ohio State University, sought by correspondence to ascertain information on the ownership and size of Kerry and Dexter herds in America. He sent letters to every person whom he could find owning these cattle. Less than 20 herds were located, but some of these were large and were actively engaged in development. There was interest in forming an organization, however it was not expedient to have a meeting. Consequently, the interested breeders formed an organization by means of correspondence and a mail vote and it became officially known as the “American Kerry and Dexter Cattle Club.” 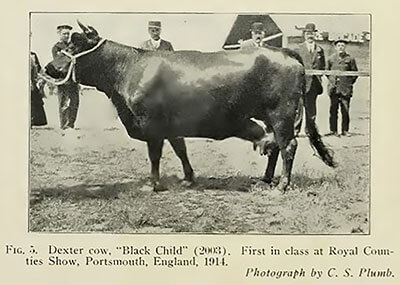 Here is a record of early Dexter breeders explains the development of the breed from 1914 onward:

F.E. Stevens of Glen Falls, New York was actively breeding Kerry cattle prior to the formation of the American Kerry and Dexter Cattle Club in 1911.

Mrs. James J. Hill of Gladstone, Minnesota imported Dexters in 1914 and established the North Oaks Herd. Mr. H.C. Lawton was employed as the “Superintendent Breeder of Dexters” for this herd. Additional animals were later purchased by Mrs. Hill from Mrs. Clarence Moore of Washington, D.C. and from Elmendorf Farm.

Mrs. Whitelaw Reid owned the Ophir Herd in Purchase, New York. It was a small herd of both Dexters and Kerries.

In 1914, August A. Busch of St. Louis, Missouri purchased Dexters from C.D. Gregg of St. Louis and established the Grant’s Farm Herd. Additional animals were purchased by August Busch in 1915 from Elmendorf Farm in Lexington, Kentucky. The Elmendorf Herd was dispersed in 1917.

In 1917, E.F. Simms of Houston, Texas purchased a small herd of Dexters from Elmendorf Farm and established the Xalapa Herd in Paris, Kentucky. 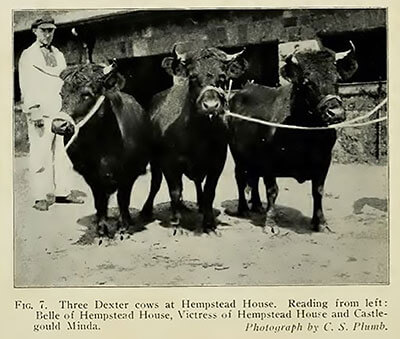 In 1917, William R. Bush of Benson, Vermont purchased a small herd of Dexters from Elmendorf Farm and established the Mountain View Herd in Vermont.

In 1917, the Castlegould Herd was sold to Daniel Guggenheim of Port Washington, New York. Guggenheim changed the herd name from Castlegould to Hempstead House.

The foundation for the Peerless Herd in Decorah, Iowa; was obtained in 1918 by John Logsdon for his daughter Nancy Logsdon from the Elmendorf Herd, Grant’s Farm Herd (August A. Busch), and North Oaks Herd (Mrs. James J. Hill). Later, Nancy Logsdon acquired two of Daniel Guggenheim’s bulls: Warrior of Hempstead House and Captain of Hempstead House.

The last registration record (all registrations and transfers up to and including December 31, 1920) of the American Kerry and Dexter Cattle Club were published in a Herd Book in 1921 and included 63 Dexter bulls and 260 Dexter cows. Soon after the publication of this Herd Book, the club ceased to operate and its records were put in the care of the Animal Husbandry Department of Ohio State University. There had been no Kerry registrations since 1920. 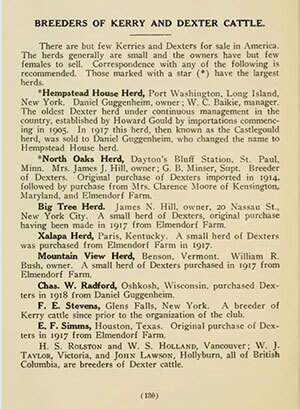 In 1944, when the Peerless Herd had their first public sale, the herd numbered 150 head of cows and heifers. Ownership of the Peerless Herd was passed from Nancy Logsdon to her sister, Daisy Moore, and then to Daisy’s daughter and son, Kay Moore Baker and Michael Moore. The Peerless Herd is the oldest Dexter herd in the United States.

In 1950, Mrs. Daisy Moore was elected Secretary-Treasurer and continued such duties until September 1982.