The Dexter Arrives:
From 1820 on, small cattle in Ireland with heavy bodies and short legs were selected out of the general population and grouped together to form a new ‘breed’ called Dexter. It wasn’t long before these animals were being exported to England, and cattle in England that had the same traits were added to the gene pool. It was expected that over time, the breed would stabilize and all those animals that did not match the trademark look and size would be bred out, and owners would be left with the best of the lovely little cattle they preferred.

As time passed, owners found that while they were getting the preferred ‘shortleg’ type, they continued also to get larger, more normal-looking cattle (known as ‘longleg’ type), as well as deformed fetuses (later called ‘bulldog’ calves), and they didn’t seem to be able to eliminate these two undesired types. The statistical proportion of births was ¼ longleg, ½ shortleg, and ¼ bulldog.

With the advent of the science of genetics, it was discovered that the very trait that made a Dexter a Dexter (short legs), was unfortunately due to a form of dominant lethal genetic mutation. As long as the mutation was the primary selection criterion, all three types would continue, and Dexters would never breed true. Rather than give up the appearance they preferred, owners chose to live with the problem.
Once the mutation was better understood, many started to breed their shortleg Dexters with the normal as they found they still got the same proportion of shortlegs but avoided the bulldog calves. For those matings, the statistical proportions were ½ shortleg, ½ normal. Until very recently, owners continued to breed both ways, with only the shortleg considered the real Dexter, and many (most) of the longlegs discarded. Since 1980 in North America, some owners have chosen to breed small longlegs, working to produce a size and look similar to the original selection criteria, but without using the lethal mutation.

The Mutation:
Dexter cattle have a unique genetic mutation that causes defective bone growth. This mutation is referred to as chondrodysplasia, and it results in the animals appearing heavy bodied on short legs. There is a large variation in effect of this single-gene mutation, with some animals being proportionate and very attractive, while others are strongly disproportionate with a dwarf-like appearance. The degree of dwarfism expressed is not consistent. At this time, the cause for the variation is not known. Carriers of this gene appear to be much more heavily muscled, but this is because muscle that is designed to attach to a normal bone is actually compressed onto a shortened one, causing the muscle to bulge. Carriers often show a greater spring of rib or can be potbellied because the organs retain their normal size yet must fit within the reduced skeletal framework, or drop below it.

The mutation affects the chondrocytes, which are minute particles of specialized cartilage that ossify to form bones. Chondrocytes are shaped rather like playing cards. They are released at one side of a ‘growth plate’, and are attracted to the other side where they go through a process that unites them into solid bone. There are growth plates on all bones except the cranium. The normal gene results in the organization of chondrocytes into hundreds of chains or columns, edge to edge (called palisading). As they pass through the far side of the plate, true ossified bone conversion takes place. It is this ‘nose to tail’ effect that creates the length in the bone. The mutated gene disrupts the normal organization of the chondrocytes, and palisading does not occur. The chondrocytes simply drift helter-skelter toward the opposite side and get converted as is.

The effect on the length of the bone can be compared to the difference in vertical height between a house of playing cards, and a deck used for 52-pick-up. The result is most visible in long bone growth because there are growth plates at both ends of those bones, which doubles the effect. Dr. Julie Cavanagh, University of Sydney (AU), discovered the genetic location of the mutated gene and presented her findings at the 2002 International Dexter Congress, and a test followed soon after. Dr. Cavanagh found that when she averaged the heights of the cows and bulls with and without chondrodysplasia that formed her database, there was an overall average difference between carriers and non-carriers of five and one-half inches in cows and eight inches in bulls. Individual animals and distinct herds can be expected to show a variation on the average.

Dexter Chondrodysplasia Inheritance:
The mutation is a 4-character mistake in a longitudinal growth gene. The mistake causes a premature ‘stop’ early in the instruction which nullifies the normal action of the gene. Because genes work in pairs, three different results are possible depending on the gene combination.

In the case where one gene is normal and one gene is mutated, the normal gene works properly but the other gene’s effect is virtually nil. The normal gene works alone, and only partial palisading takes place. While there is long bone growth, it is less than usual, and the result is shortened bones, especially legs. This is the Dexter ‘carrier’, or the classic original selection. 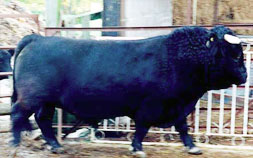 In the case where both genes are affected, all chondrocytes are disorganized. No palisading takes place, and there is virtually no bone growth. The fetus is aborted most frequently either between 30 and 60 days (information provided by experienced English breeders with large herds; less experienced owners think the cow simply didn’t settle and rebreed her) or between 6 and 8 months (in which case the fetus has vestigial legs, an abdominal hernia and a ‘bulldoglike’ head). This is the Dexter ‘bulldog’, always born dead, hence the genetic designation ‘lethal.’ 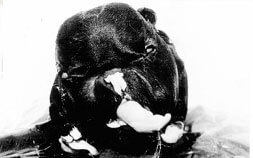 The combinations below are statistical probabilities. Every calf is a new throw of the dice. There is no specific bias toward any one direction; no inclination to one result over another. It is all pure chance. The possible statistical genetic combinations are:

A quick examination of the above breeding statistics makes it clear that only the non-carriers breed true. For those who wish to breed the carrier, both types will be produced, creating a herd that shows a wide range of heights because of the effect of the mutation.

Because we are dealing with a form of dominant gene, many carriers can be identified visually. However this does not hold true 100% of the time. Only genetic testing can identify the presence of the mutation. With that knowledge, owners can make informed breeding choices.

The ADCA recommends that owners who wish to breed the carrier type mate carriers with non-carriers to avoid their cows having bulldog calves.

Those who test will receive test result certificates from Texas A&M, the official ADCA DNA lab.
Here is the test result interpretation table that appears on the reports: 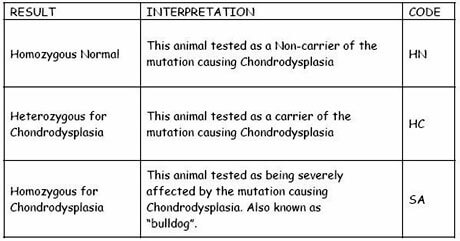