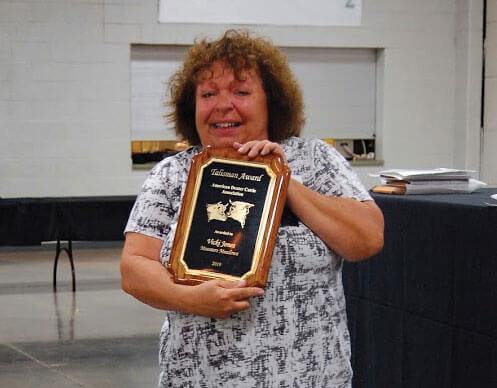 The ADCA Talisman Farm Award winner for 2019 is:
Vicki Jones of Moosters Meadows

The ADCA Talisman Farm Award is given in memory of John Hays of the Talisman Herd. An attorney and accomplished musician, John and his wife Belle purchased their first Dexters in 1974. John was integral in the reorganization of the “American Kerry and Dexter Club” into the American Dexter cattle Association in 1978, writing the original Articles of Incorporation and By-Laws. John also acted as a Regional Director for the Pacific Region. In 2004, Before John’s passing, he and Belle wrote the 4th Edition of Dexter Cattle. Belle presented this book to the association in memory of her husband.

John and Belle were strong supporters of black, horned Dexters and have 78 cattle registered in the ADCA national pedigree database. Both John and Belle were awarded honorary lifetime memberships in the ADCA and will always be remembered for their passionate service to our community and to the preservation of this special cattle breed.

The Talisman Farm Award is presented annually at the ADCA National Dexter Expo. It recognizes the ADCA Dexter family, couple, or individual that stewards an exemplary herd of Irish Dexter Cattle with honesty, integrity, and faithfulness. It includes recognition at the Expo, an award plaque, and recognition in the ADCA Bulletin.